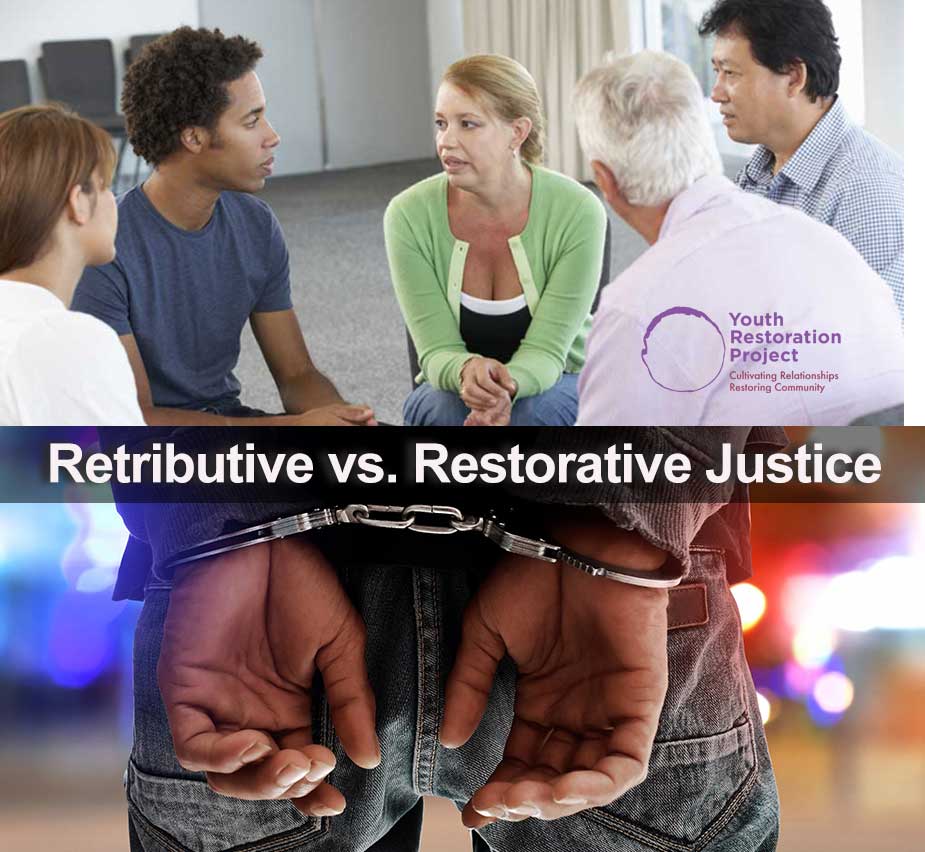 What do we want a justice system to accomplish?

The modern judicial system and restorative justice (RJ) both aim to support public peace and safety. But their methods have radically different outcomes. For a quick orientation, check out YRP’s side-by-side comparison.

For a deeper understanding of distinctions, let’s start with a brief look at the beginnings of modern RJ.

Originating in tribal circles, RJ has been around from time immemorial, practiced by indigenous people across the world – New Zealand’s Maori, Canada’s First Nation, Native Americans, Australian Aborigines and others. In the event of crimes or threats to the community, the tribe’s elders convened a meeting that included the victims and their family or allies and the offenders and their family or allies.

Today, the RJ process is always voluntary. Victims and offenders can either agree to participate in it or go the usual route through the courts. Restorative facilitators discuss the process separately with the various parties before a circle convenes, to prepare them and get some background on their issues.

When they come to the meeting, participants pass an object, called a talking piece, to indicate whose turn it is to speak, uninterrupted. They sit in a single circle so they can all see one another as they tell their versions of the story. Ideally, they arrive at a common understanding of what happened, who was affected, what contextual forces were at play (abuse, deprivation), and most importantly, what the victims experienced and need as a result. Offenders give an account of their actions and take responsibility to make amends.

Then the facilitators guide the group through negotiations aimed at an agreement regarding what amends the offenders can and should make to the victims.

Offenders need to hear how their actions affected the victims. Victims need questions answered, and expressions of genuine remorse. The community stands with them to hold them accountable on the one hand, and support the harmed on the other. At the end of the day, the goal is to re-knit badly broken relationships so they can be okay with one another. They don’t need to be besties, but the community needs to be protected from retributive feuds that are always at risk of blowing up again.

Upon completion of the amends, the group might celebrate. The Maori for example greet the restored offenders back into the mainstream with a traditional song.

RJ’s goal: successfully reintegrate all parties into a restored community.

In tribal societies, banishment could effectively be a death sentence. Survival required everyone working to weave a tight community fabric. Mutual protection was their public safety. Bad blood undercut the community’s ability to function – raise kids, plant fields, make clothing, food, housing. Australian criminologist John Braithwaite emphasized the importance of reintegration in one of RJ’s earliest and seminal books, Crime, Shame and Re-integration. He notes that most of us have done things we sorely regret, for which we’d love to make amends and regain our good standing with others. However scarred, our relationships must heal for us to regain a high quality of life.

On a modern judicial indictment, it says: The State vs. Julia. The State is the harmed party. The victims don’t have a principal role. They might get monetary compensation, perhaps permission to read an impact statement. But the case is not about them. It’s an adversarial battle waged between lawyers who spin competing narratives with expert witnesses, compelling evidence and implication. The goal is to win.

A judge or jury makes a bimodal decision: guilt or innocence. Getting to the root of the problem, including the context in which the crime took place, is hardly relevant. Then a judge dishes out punishment.

Boom, goal accomplished. On our wealth of American cop shows, that’s the end of story. Punishment satisfies our primitive desire for eye-for-an-eye justice; you hurt me, so I hurt you.

The system is built ona faith in “rehabilitation” – that punishment will somehow hurt the offenders into healthy and appropriate behavior for when they get out. Crime is a personal choice for which they must atone. Social circumstances like poverty or systemic racism are just excuses.

What we don’t see on the cop shows are the offenders’ lives in ruins, along with their family’s well-being. The system is enormously expensive, sucking resources out of the communities that probably didn’t know how to deal with the offender in the first place. Instead of celebration and welcoming songs, we have under-funded non-profits that struggle to help offenders climb the steep, often impossible hill towards some form of reintegration.

Implementing restorative justice is tough, but worth it.

In most RJ research, roughly 85% of victims are highly satisfied with the process. Offenders’ rates of recidivism vary widely, but they are all much lower than the roughly 75% of juvenile offenders who show up in the judicial system again within 5 years.

Retributive justice spawns more retribution. But when healing and reintegration are the goal and the metric of success, working to re-knit the community will have far more lasting, productive and peaceful results.