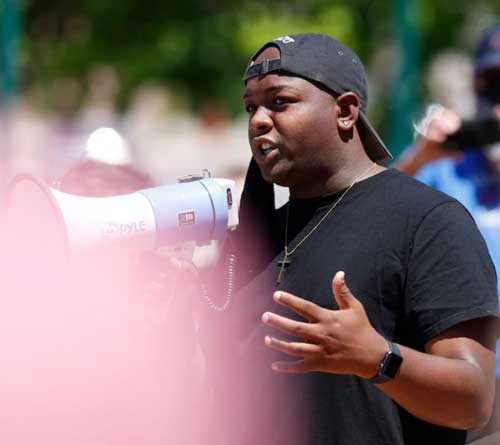 The police should not be handling school discipline.

Tay Anderson was a student and is now a graduate of the Denver Public Schools. He knows firsthand what it is to be a teenage boy of color in a school with a police presence, namely a School Resource Officer (SRO). SROs are not security guards; they are not remotely what we would advocate – restorative-justice facilitators. They are sworn officers, carrying guns, trained to react quickly and assertively to perceived threat.

Yes, there are lovely SROs. The handful who took our restorative justice training were impressed by discovering alternatives to punitive action. But however community-oriented some police departments are, SROs must enforce laws designed to control crime in the streets. School discipline is not police business. The school can always call them in the event of a major issue.

As a grown man, Anderson was elected to a seat on the Denver School Board, where he advocated for the removal of the School Resource Officers (SRO) from the city’s public schools. The idea didn’t catch fire with his fellow board members.

But on May 25th , Anderson’s patience completely ran out. George Floyd had died under the knee of a Minneapolis police officer.

Denver’s Superintendent and three other board members published a statement condemning murder we all saw in that awful video.

Eliminating the SROs is an action — visible, practical, on point.

In the scheme of the racial crisis boiling over in streets internationally, canceling the SRO contract with the local police department might seem like small potatoes. But YRP believes in practicing the virtues of Practical, Doable and Specific. The slogans on the protest signs are impassioned aspirations – Justice now! That’s great, but after decades of protests, people need to see, concretely, what it would look like if we got it right. Dismantling bad ideas like SROs, to name only one of many, could aid the collapse of the authoritarian structure designed for certain people, but not all.

Instead, the actions people see include the scene at the Capitol building the day following Floyd’s death. Denver police dispersed a crowd of protesters with tear gas

“To see they were part of those tear gassed and shot at with rubber bullets, it breaks my heart.” When students return to school, “the last thing I want is for our kids to be greeted with SROs.”

In the 1980s President Reagan ramped up the “war on drugs,” which ramped up mass incarceration, which used prison to handle substance abuse disorders most of whom were young men of color. The surge of babies born addicted to drugs stoked groundless fears about the coming of “super-predators.” And while 1980s politicians were all about bringing the hammer down hard in the name of law and order, the 1990s got flat-out mean. “Zero tolerance” policies quickly infiltrated schools. Concerned school personnel fought the very idea of intolerance, especially without investigating the context of the misbehavior. But the 1999 Columbine shooting nailed that coffin, sealing the public’s faith in having a police presence as the only way to maintain safety. The Justice Institute’s Education Under Arrest: The Case Against Police in Schools “found that there’s no evidence school resource officers make school safer.” Worse, they came with unintended consequences – increased arrests, increased suspensions for “disorderly conduct” and “insubordination,” and criminalizing adolescent behavior. Ugly racial disparities have been well-documented and discussed ad nauseum.

Anderson wants to re-deploy the money spent on SROs to hire more school nurses and counselors who would provide more caring and healing than a police presence. Of course, we think Restorative Justice facilitators would be even more useful by engaging the whole school community with empathy and conflict resolution, instead of just focusing on misbehavior.

And lo! The Minneapolis School Board ends SRO program.

Then as I was writing this piece, Minneapolis, the very the site of Floyd’s death, took action on Anderson’s policy wish. According to the Guardian, Nelson Inz, one of the school board members said, “We cannot continue to be in partnership with an organization that has the culture of violence and racism that the Minneapolis police department has historically demonstrated. We have to stand in solidarity with our black students.”

So, Mr. Anderson, take heart! The Minneapolis Schools have become a terrific ally. This time your fellow School Board members will surely be listening. Good luck.

That happened just this morning. The Denver Board members did listen, at last. Anderson must feel pretty marvelous about that. He got action!

Now that two cities have made a good-sized start to ending this harmful practice, let’s do what we can to help other school systems keep that ball rolling. End hiring SROs.

If you still need convincing, watch this video.